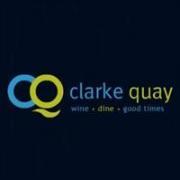 Head down to Clarke Quay on a weekday from 11am – 3pm and dine at one of Singapore’s trendy riverside restaurants for only SGD15 (USD11.50) nett.  More than 20 restaurants and even some attractions like Hippo River Cruises are participating in the weekday lunch promotion.

Each of the participating restaurants is offering a special set lunch menu for just SGD15 (USD11.50) inclusive of taxes and service charge.  Many of the lunches consist of 3 courses including a starter, main, and dessert. For example, at Freemantle Seafood Market lunch starts with soup or salad, then your choice of entrée like battered shrimp or seafood pasta, then dessert of the day. At Renn Thai Restaurant the meal begins with spring rolls or papaya salad, then a curry or phad thai noodles, plus a beverage.  The promotional lunch at the Singapore Sling Boutique is a chili crab pizza and Singapore Sling cocktail while Ivory the Indian Restaurant is offering a buffet.   Other options include Japanese, Chinese, Mexican, Middle Eastern, British and American cuisine.

Although the menus and participating outlets may change, this is an on-going promotion.  Most promotions are available from 11am-3pm, though the lunch period varies slightly by restaurant.  For more information and to view current lunch menus, visit the Clarke Quay website. 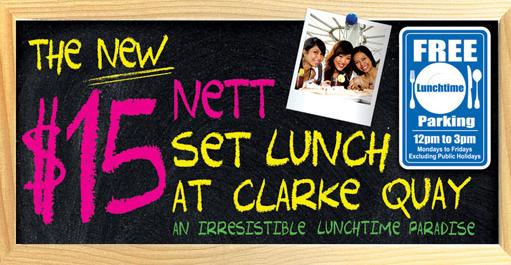