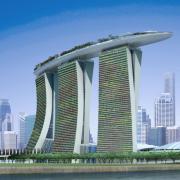 Marina Bay Sands, Singapore’s second casino resort, launched the first phase of its opening on 27 April. 963 hotel rooms, along with the casino, convention center, shops, restaurants and bars are now available to the public.

The hotel currently accepts bookings for the Atrium Premier and Atrium Grand rooms at a rate starting from SGD419++ (USD303++) per night. Upon the official grand opening on 23 June, the iconic resort will have a total of 2,560 hotel rooms spread across three towers. Guests can choose from the Atrium, Horizon or Marina Bay Club rooms, or opt for one of the hotel’s ten suites for a more luxurious experience. The Marina Bay Sands hotel also has Les Clefs d’Or accredited staff on their team offering a range of concierge services, such as limousine bookings and event planning.

The Sands SkyPark is an observatory deck on the 57th storey that sits atop the three hotel towers. The uninterrupted view of Marina Bay and the Central Business District comes complete with the exclusive Marina Bay Club, an infinity edge swimming pool, sculpted gardens and The Sky on 57, a restaurant helmed by Singapore chef Justin Quek.

The second phase of opening will take place on 23 June with the unveiling of the remaining hotel rooms, the Sands SkyPark, more shops and dining options. In October, Disney classic The Lion King makes its way from Broadway to the theater of Marina Bay Sands.